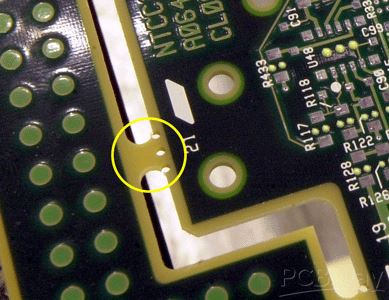 When PCBs are manufactured, they aren’t printed one by one. A number of PCB copies are gathered inside a panel; as many as the panel can fit. This action is called panelization. Now, to make de-panelization easy, cuts are made between the copies and a small contact areas are kept in the fiber. This areas have holes in them which are called stamp holes. I think it’s called a stamp because it will leave an edge like the edge of a stamp when the boards are separated. [UPDATE] This mark has another name: mouse bites. Thanks to darryln for sharing this information. 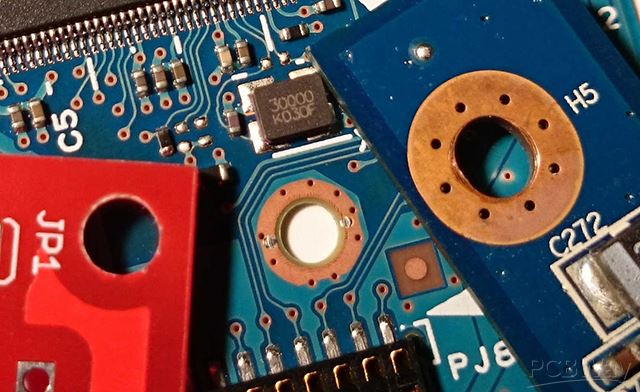 In many cases you may see mounting holes surrounded by tiny VIAs. After some search, I found an answer on StackExchange explains this. We have 2 type of mounting holes: plated and un-plated. The surrounding VIAs may be used for 2 reasons:

1.When we want to connect the hole with an inner layer (like GND in multi-layer PCBs).

2.In case of un-plated hole; When we want to connect the upper pad with the bottom one. 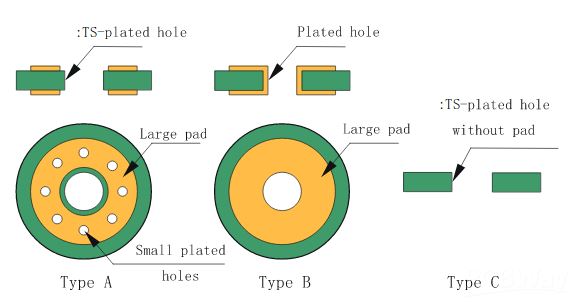 One of the defects in wave soldering is the soldering bridges especially for SMD parts, and as a solution, it was found that using an extra pad in the end of the pins raw will solve the problem. The width of the extra pad is 2-3 times of the regular one.

It’s called robber pad (AKA solder-thieving) because it take the excess of the solder and prevents any soldering bridges. 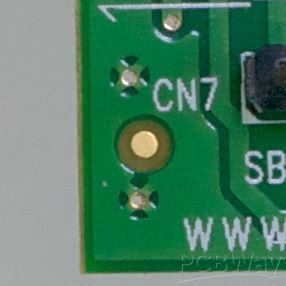 A bare copper circle inside a bigger a bare circle. This fiducial mark is used as a reference point for Pick and Place (PnP) machines. Fiducial marks are placed in three places:

3.In the PCB corners. 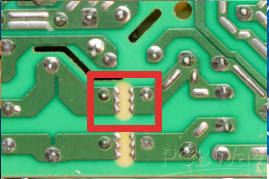 It’s for ESD, current surges and over voltage protection. The high voltage will ionize the air between the two terminals and a spark will form across them before it damages the rest of the circuit. It’s not advised to use this way of protection, but it’s better than nothing.

According to an issue published by Microchip, the main drawback is that performance can change over time. The breakdown voltage can be calculated with the following formula V=((3000×p×d)+1350), where “p” is the pressure in atmospheres and “d” is the distance in millimetres. 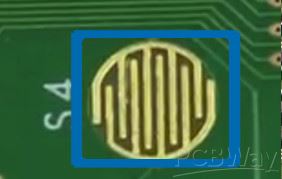 If you have ever torn down a remote control or a calculator, then you should see like this pad. It consists of two interleaved terminals (but not connected). When the rubber button from the keypad is pressed it will cause the two terminals to be connected, since the bottom of this rubber buttons is conductive. You can find this PCB button in Sparkfun Eagle CAD library (SparkFun-Switches) or you can build your own custom-shaped pad in Altium. 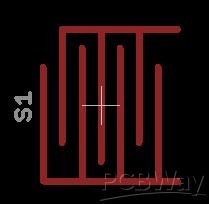 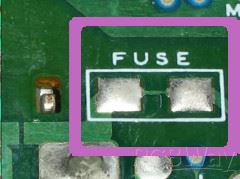 Similar to the Spark Gap, this is another cheap technique using PCB. The fuse trace is a necked trace on the power line, and it’s a one-shot fuse. The same configuration can be used as a PCB jumper to remove a certain connection by simply etching the necked trace (the PCB jumper can be found in some Arduino UNO boards on the Reset line). To know more about the downsides of using a fuse trace, read this related question on StackExchange. 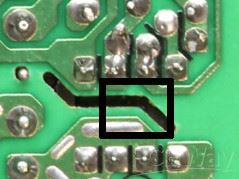 If you look into a high voltage device PCB like power supply, probably you will notice some air slots between some traces.

Repeated temporary electrical arcs in a PCB causes the carbonation of the PCB, which leads to a short circuit. To this end, a routed slots can be added in suspected areas, where arcs can still occur but nothing will be carbonized.

Is there any other mark, you have seen, and never know why it’s there?

2. 4 Steps to Get Through Hole Soldering done perfectly