What we discussed here is the layout of the components of the multilayer board. The key to the layout of components is to fix the components on the RF path. By adjusting its direction, the length of the RF path is minimized, and the input is far away from the output, and the high-power circuit and the low-power circuit are separated as far as possible. The signal is far away from high-speed digital signals and RF signals.

The following techniques are often used in the layout.

The components of the RF main signal are arranged in a straight line as much as possible, as shown in Figure 1. However, due to the limitation of PCB board and cavity space, it cannot be laid out in a straight shape in many cases. At this time, L-shaped layout can be used. It’d be better not to use U-shaped layout (as shown in Figure 2). When it is unavoidable, it’d be better to increase the distance between input and output to at least 1.5cm. 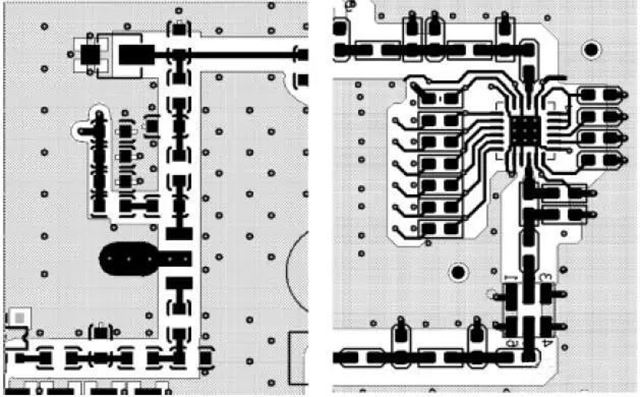 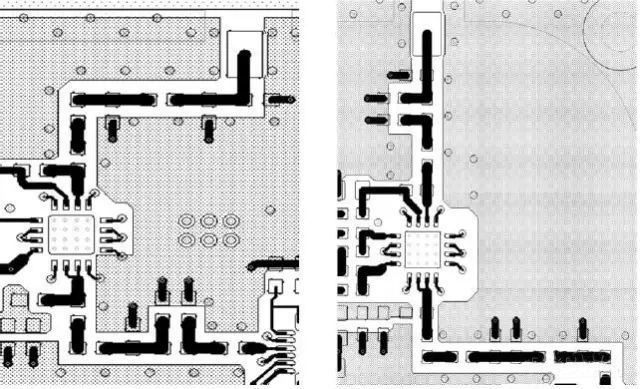 The same modules should be made into the same layout or symmetrical layout as much as possible, as shown in Figure 4 and Figure 5. 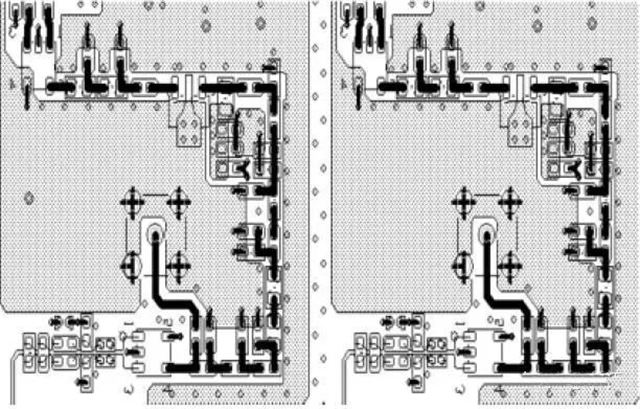 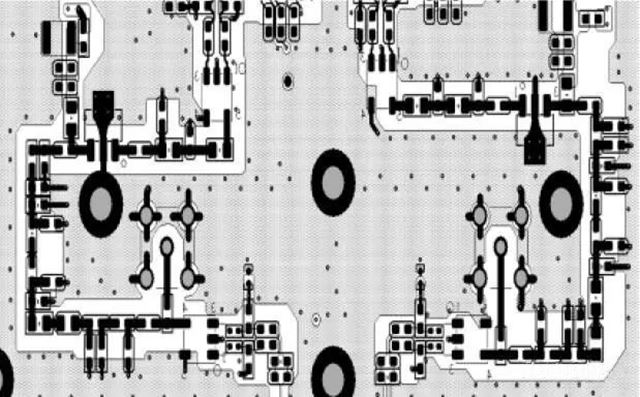 The feed inductance of the bias circuit is placed perpendicular to the RF channel, as shown in Figure 6, mainly to avoid mutual inductance between inductive devices. 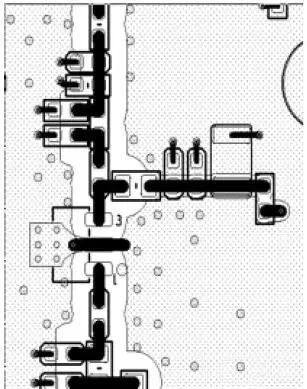 In order to use the space reasonably, the devices can be arranged in a 45-degree direction to make the RF line as short as possible, as shown in Figure 7. 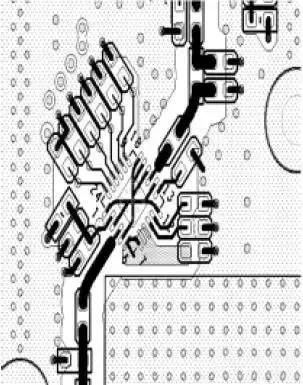 The overall requirements for wiring are: RF signal traces are short and straight, reduce line abrupt changes, drill fewer holes, and do not intersect with other signal lines, and add as many ground vias as possible around the RF signal line.

The following are some commonly used optimization methods: 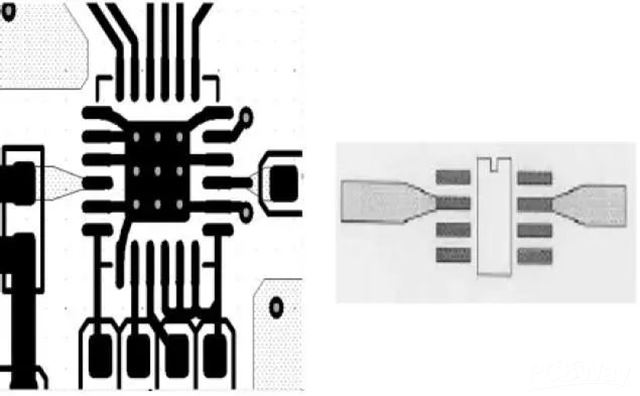 If the radio frequency line cannot be straight, treat it as an arc line, which can reduce the external radiation and mutual coupling of the RF signal. Experiments have shown that the corners of the transmission line are bent at right angles, which can minimize return loss. As shown in Figure 9. 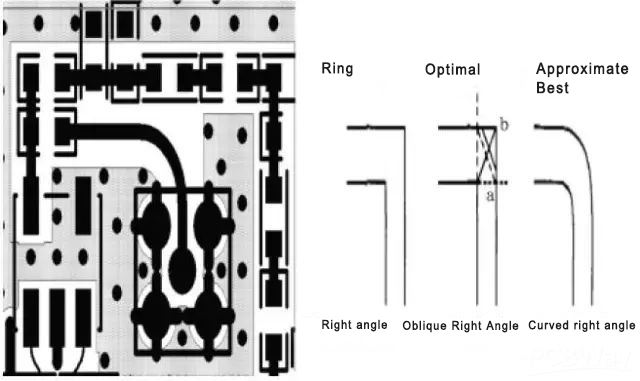 The power supply of the RF circuit should not be divided into planes as much as possible. The entire power plane not only increases the radiation of the power plane to the RF signal, but also is easily interfered by the RF signal. Therefore, the power cord or plane generally adopts a long strip shape and is processed according to the size of the current. It is as thick as possible under the premise of meeting the current capacity, but it cannot be widened without limit. When handling power lines, be sure to avoid loops.

The RF signal and the IF signal should be crossed with a ground if it is possible.

When RF signals cross other signal traces, try to arrange a layer of ground connected to the main ground along the RF traces between them. If it is not possible, make sure they are crossed. Other signal traces here also include power lines.

Coplanar impedance of radio frequency signals, interference sources, sensitive signals and other important signals can not only improve the anti-interference ability of the signal, but also reduce the interference of the signal to other signals. As shown in Figure 10. 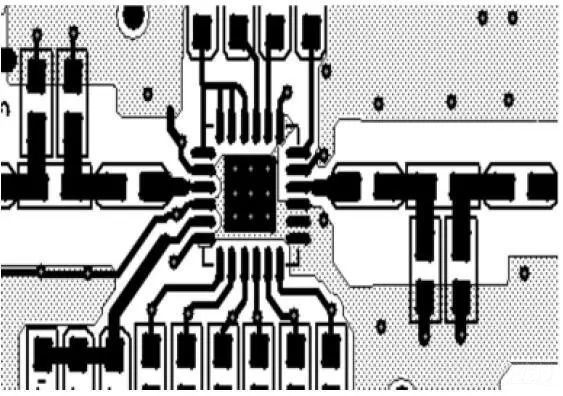 The RF line must be at least 3W wide from the edge of the adjacent ground plane, and there must be no non-ground vias within the 3W range. 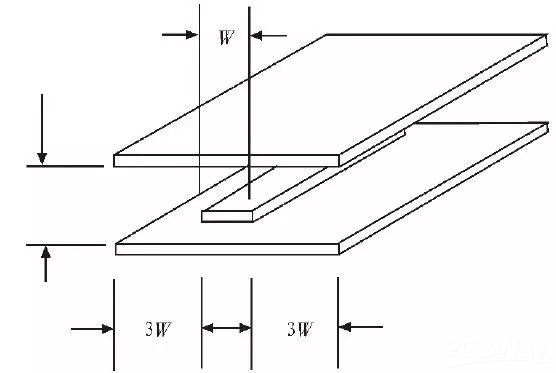 The radio frequency lines of the same layer should be have coplanar impedance, and ground vias should be added to the ground copper. The hole spacing should be less than 1/20 of the wavelength (λ) corresponding to the signal frequency, and they should be evenly arranged.

For the entire RF circuit, the radio frequency units of different modules should be isolated with a cavity, especially between sensitive circuits and strong radiation sources. In high-power multi-stage amplifiers, the isolation between stages should also be guaranteed. 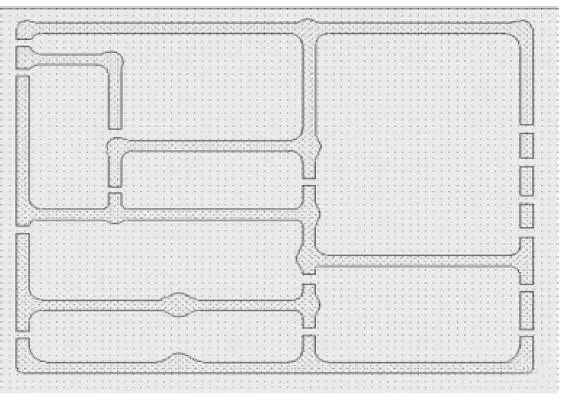 The periphery of the shielding cavity is sealed, and the interface line into the cavity is generally a strip line or a microstrip line

1. 4 Steps to Get Through Hole Soldering done perfectly