eFuse, or electronic fuse, is an IC (integrated circuit) that can replace conventional fuses or other protection devices like re-settable polymer fuses. Unlike conventional circuit protections, the eFuse offers much faster and more accurate intervention, without requiring replacement after the actuation. This is the biggest advantage of eFuse over the conventional fuses. They can be used to protect a system/device/PCB against overvoltage, short circuit, inrush currents and reverse polarity events. 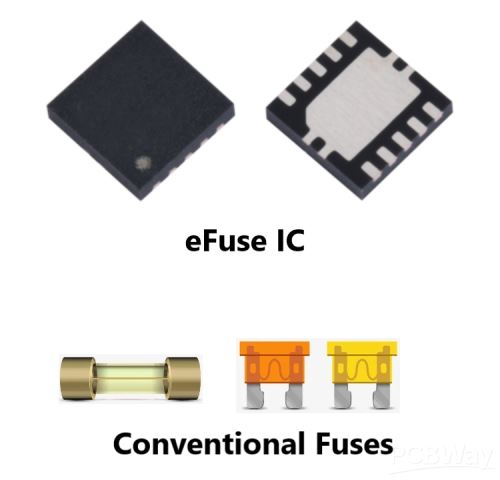 How does eFuse work?

Although both thermal and eFuses contain the word “fuse,” their operating principles are quite different. The principle of the conventional thermal fuse is that if current gets too large, the current heats its fusible link via I2R dissipation and melts it down. The speed of this melting action and opening of the current path depends on how much excess current flows and for how long. Whereas , in the eFuse, current to the load passes through a FET while a dedicated current sensor measures that current by monitoring the voltage across a sense resistor. When the sensed voltage exceeds a threshold limit, the FET is turned off and the current flow stops (a minor FET leakage current may still flow) or limits the output current to a safe value defined by the user. If the abnormal overload condition persists, the device goes into an open state, disconnecting the load from the power supply. Typically, the overload current limit can be programmed by means of an external resistor.

Block diagram of a typical eFuse IC is given below: 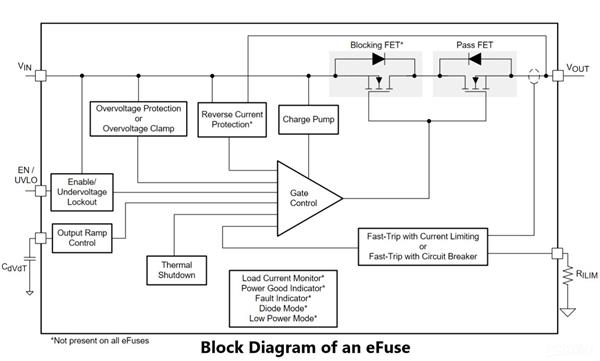 TPS259271DRCR and TPS26631PWPR  from texas instruments, NIS5820MT1TXG from ON semiconductor, STEF01FTR from STMicroelectronics, TCKE800NL from Toshiba Semiconductor are some of the popular eFuse ICs available on the market.

Some potential applications of eFuses include:

eFuses are IC based protection devices that are used to limit circuit currents, voltages to safe levels during fault conditions. When connected in series to the power line, it operates like a standard fuse with the ability of detecting and quickly reacting to overcurrent and overvoltage conditions.  In addition to the overcurrent and voltage protection function, various other protection functions such as,  inrush  current  suppression, overheat  protection,  and  the  reverse  current  prevention  function,  which  cannot  be  realized  by  conventional  fuses,  can  be  packaged  in  one  package. This reduces the number of components, saves mounting space on the PCBs, thus contributing to lower costs and downsizing.