Those using their Raspberry Pis to emulate the classic BBC Micro have a new add-on that is designed to bridge the device to those featuring Acorn's vintage Econet, offering a blend of the old and the new: the Econet HAT.

"The combination of this hardware and software is intended to provide a bridge between a real BBC Econet and the AUN [Acorn Universal Networking] world of BeebEm (and probably other things which use AUN)," explains designer Chris Royle. "It contains also contains a relatively operable Level3-ish fileserver, and an emulation of an Acorn print server, capable of use by both BeebEm and real BBCs."

The idea: Slot the board atop a Raspberry Pi running the BeebEm emulator, and it will be able to communicate with real BBC Micros and other Econet-enabled hardware - or simply other Raspberry Pis also running BeebEm.

The system has another trick up its sleeve, too: A handy network-bridging capability. "It is possible to put two (or more) of these bridges 'back to back' and join two real BBC Econets together over the IP network, including the Internet, providing the correct ports are opened," Royle explains. "The necessary ports are the ones you configure in the configuration file."

Royle released the project under the reciprocal GNU General Public License 3, while fellow Acorn enthusiast Ken Lowe both assisted with testing and improving the design and in taking the concept and building HAT-format boards for sale — boards which have recently begun reaching eager users. 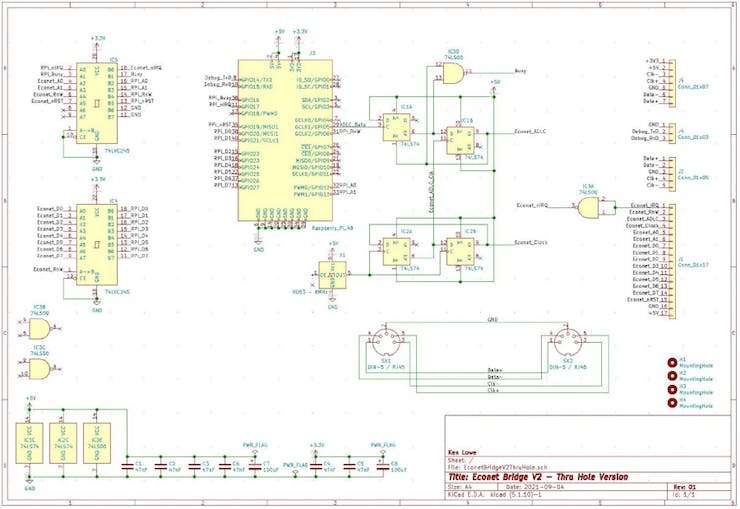 "I received my Econet bridge from Ken last week," one such recipient, user "Ottly" on the stardot.org.uk forum, writes. "I had a bit of a play over the weekend and managed to get BeebEm talking to my Econet. All on NET 0. Fantastic work by you all to get this working!"
Share Share on Facebook Tweet Tweet on Twitter Pin it Pin on Pinterest
Back to Licky's Column