The difference of these two manufacturing processes:

Key Points and Main Problems to Control the Manufacturing Process:

In general, the depth on the z-axis of a drilling rig is generally controlled by servo motor, and its depth reference point is calculated from the table, and the accuracy tolerance can only reach about 0.05 mm. If the mechanical drilling machine is used to drill the blind hole, the depth tolerance of the blind hole is greatly affected by the thickness of PCB. In addition, there are many cases where the dielectric layer between layers is as small as 0.1mm, so the drilling depth tolerance is only about 0.05mm, which is also difficult to bear. Thus, it can only be used in cases where the dielectric layer between layers is relatively thick and customers have not strict requirements on the depth tolerance.

Control the Depth of Drilling Holes:

It is suggested that horizontal Desmear should be used to extend the treatment time appropriately and strengthen the oscillation, so as to avoid that there are microbubbles in the blind holes and the potion cannot be changed.

The A.R. ratio of mechanical blind holes is basically 1.2 : 1. It is recommended to use horizontal PTH electroplating line to ensure the exchange of liquid in the blind holes and avoid the generation of microbubbles. If the vertical production line is used, the oscillation should be strengthened and the current density should be appropriately reduced and the plating time should be prolonged to ensure that the bottom of the blind hole can be plated with copper normally. 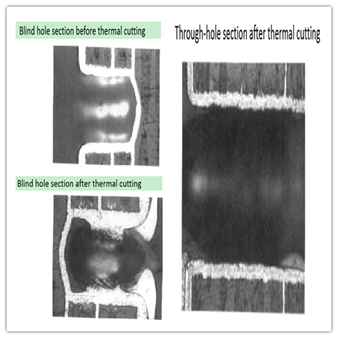 The mechanical blind hole can achieve the better coating uniformity by adjusting the positive and negative current ratio of PTH and the condition of pattern electroplating.