Back Drilling --- A special craftsmanship of control depth drilling

What is Back Drilling?

Backdrill is the process of creating vias by removing the stub in multilayered printed wiring boards, to allow signals to flow from one layer of the board to another. (The stubs will cause reflection, scattering, delay and other problems in the transmission of the signal, which will distort the signal.) It is a special craftsmanship of control depth drilling.

In the production of multilayer boards, such as the production of 12-layer boards, we need to connect the first layer to the 9th layer. Usually we drill through holes (one-time drilling) , and then plate the through vias. In this way, the first floor is directly connected to the 12th floor. In fact, we only need the first floor to be connected to the 9th floor. Since the 10th to the 12th floor are not connected by wires, they are like a pillar. This column affects the signal path, and can cause signal integrity problems in the communication signal. So this extra column (called STUB in the industry) was drilled out from the reverse side (secondary drilling). So it is called back drilling, but it is generally not as clean as the drill, because the subsequent process will electrolyze a little copper and the drill tip itself is also sharp. So we will leave a small point, the length of this left STUB is called B value, generally in the range of 50-150UM. 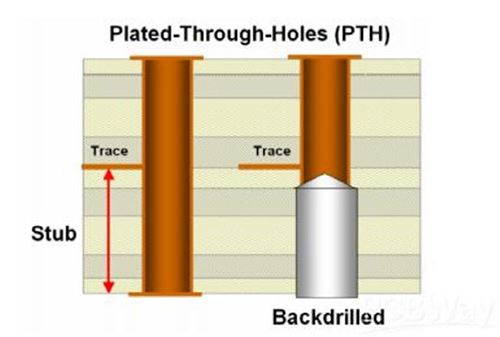 Advantages of Back Drilling

4.Performing graphic plating on the PCB after the outer layer pattern is formed, and performing dry film sealing treatment on the positioning holes before the graphic plating;

5.Use the positioning hole used by the first drill for back drilling positioning, and use a drill to back drill the electroplated holes that need to be back drilled; 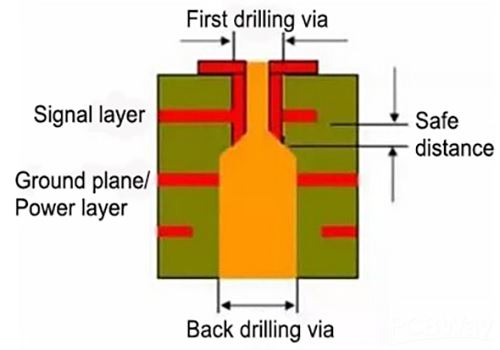 Difficulties of Back Drilling process

Back drilling is to use the depth control function of the drill to realize the processing of blind vias, and its tolerance is mainly affected by the accuracy of the back drilling equipment and the tolerance of the medium thickness. In addition, its accuracy is easily affected by the outside world, such as the resistance of the drill, the angle of the drill tip, the contact effect between the cover board and the measuring unit, and the warpage of the board. Therefore, it is necessary to select suitable drilling materials and drilling methods during production to control its accuracy to reach the best result.